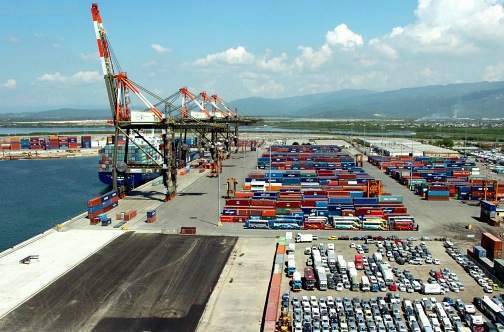 The harbour receives waste from the streets and gullies of Kingston; poorly functioning sewage treatment plants; and runoff from agriculture and industry, she said. These issues, along with air quality concerns, affect many other areas in Jamaica.

Ms. Stanley explained that JET’s objective to preserve the country’s natural environment has direct benefits for Jamaicans, who can only thrive in a healthy environment. She was speaking during a recent visit to Kingston Harbour with Chris Hind, General Manager, JN General Insurance Company, as part of JET’s effort to increase public awareness of the problems.

Mr. Hind pointed out that, “We see the Riverton dump on fire, over and over again, but I am not sure that as a community, we recognize the damage it does to the environment, but also to us. When the air is bad, Jamaicans suffer from the pollution, but they do so silently, painfully and slowly.”

“If we as a community, recognized the true extent that pollution from Riverton, and other sources, is affecting our health and welfare, we would organize ourselves to deal with the problems,” Mr. Hind said. “The danger extends far beyond the health of the Kingston Harbour, because we are all at risk.”

Ms. Stanley added that, “The Riverton City dump is the largest in Jamaica, but Environment Reports by the National Environment and Planning Agency consistently show that it and many of the other solid waste disposal sites are at a critical level. The difficulties of managing solid waste in Jamaica are compounded by the fact that a significant portion of the waste generated remains uncollected.”

The National Solid Waste Management Authority (NSWMA) estimated in 2013 that, its solid waste services covered about 70% of the population, so that about 30% of collectable solid waste generated in the country remains uncollected.

“A lot of the uncollected garbage is washed down gullies and into the sea,” Ms. Stanley said. “Plastic persists in the environment, and, a lot of this material ends up on the country’s beaches.”

The NSWMA found that most of the solid waste it collects, consisted of biodegradable organic matter, but that the largest single element in the non-organic waste stream consists of plastics.

Ms Stanley explained that JET hosts International Coastal Cleanup Day in Jamaica every September, to raise awareness about the solid waste pollution issue, with JNGI being one of many participating private sector entities.

Chris Hind, noted, “our JNGI team has been participating in Coastal Cleanup Day at Palisadoes for years now because it is crystal clear to us just how important Jamaica’s environment is to the country’s future success. We will continue to support JET, as it continues its advocacy for a healthy environment for our benefit, and that of future generations of Jamaicans.”